Miss Madison Racing is celebrating its 60th anniversary in 2021.  The racing team began in 1961 when Samuel DuPont donated his Nitrogen hydroplane to the City of Madison.

The team will be sharing favorite memories of team members, former drivers and fans throughout the season on social media.  Miss Madison Board member Dave Taylor has created a digital souvenir photo book covering the history of the team that will be available for sale at race sites through the team’s merchandise tent.

In 1988,  noted marine artist Paul C. LaMarre, Jr. created a watercolor painting, “The Evolution” capturing the 5 hulls that had raced as Miss Madison at that time.  In honor of the 60th anniversary, Paul has completed a new painting, “Madison’s Legacy” that depicts the now 7 hulls that have raced for the team.

On June 22, 2021, The Madison City Council issued a proclamation recognizing the anniversary and honoring the racing team members, past and present.

The 60th anniversary logo below, also featuring artwork by Paul C. LaMarre, Jr., will be used throughout the year. 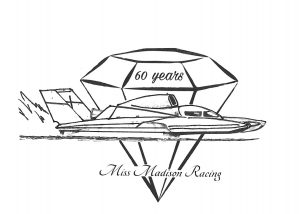