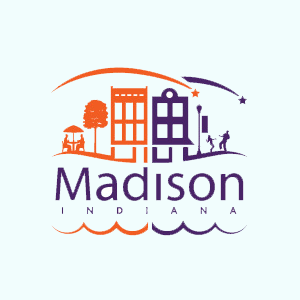 Madison, Indiana was settled in the early 1800’s by pioneers floating down the Ohio River looking for new opportunity. It became one of the major cities in the Midwest. Envisioned as the State Capital, Madison was designed with wide boulevards to showcase the government buildings and fine homes. However, America moved westward, leaving Madison behind.

Today, renewed appreciation for historic preservation has brought new life to the city. The entire downtown (over 2,000 structures) is on the National Historic Register. In 2006, the Secretary of the Interior presented the City with the designation of National Historic Landmark District. The city has been recognized as one of a “Dozen Distinguished Destinations” in America in 2001 by the National Trust for Historic Preservation. The Ladies Home Journal has called Madison “the prettiest small town in the Midwest.”

Madison was the setting for the 1958 movie “Some Came Running” which starred Frank Sinatra and Dean Martin, and for the movie “Madison” which re-created the city’s 1971 APBA Gold Cup hydroplane victory. The movie, starring Jim Caviezel and Jake Lloyd, was released in April 2005. Also filmed in Madison was a 15-minute World War II propaganda film, “The Town”.

Currently a city of 12,500 people, Madison is a thriving industrial, commercial and residential area conveniently located within an hour or two of Cincinnati, OH, Lousville, KY and Indianapolis, IN.

Madison, Indiana offers a variety of festivals and special events throughout the year. Come join us in the celebrations!

For a schedule of events or to check the status of an event, contact the Madison Area Convention and Visitors Bureau at 800-559-2956 or 812-265-2956 or visit the web site www.VisitMadison.org for current information on upcoming events.