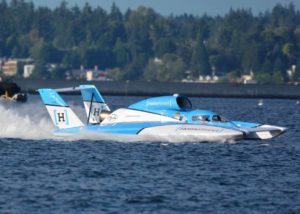 The Miss Madison Racing Team was established in 1961 when industrialist Sam DuPont donated his unlimited hydroplane known as Nitrogen to the people of Madison, Indiana. The Miss Madison has been campaigning on the unlimited circuit ever since – the longest running continuous team in the sport.

When the original Miss Madison hydroplane was destroyed in a racing accident in 1962, DuPont sold his second boat, Nitrogen II, to the city for $5,000. The world’s only community owned hydroplane is administered by a board of directors appointed by the city’s mayor. Charlie Grooms serves as President of the Miss Madison, Inc. Board and Team Manager.

More information about the historic hulls of the Miss Madison can be found on the Team Timeline page.

Specifications for the current Miss HomeStreet

The Madison Racing hydroplane utilizes a canopy from an F-16 jet fighter to protect the driver. The canopy is attached to a roll cage, which is bolted to a normal core cockpit. The driver sits in a form fitted seat utilizing a five-point harness to hold him in the seat. He also is supplied with compressed air and an oxygen mask to facilitate breathing should the cockpit fill with water.